100 Useless Facts about me

First thing you do when you wake up in the morning:
Think: ugh really can I not just sleep a little longer. Get up, let the dogs out, come back in, use the bathroom, go and wake up the kids. Then the chaos begins.

First thing you reach for when you open the fridge:
9 times out of 10 Coke Light

First things you do when you get to the gym:
I wish I had the time to go the gym / or found a gym close to my house that is open either super early or really late at night

First thing you do when you get home from work:
Let the dogs out. Find out who is at home, start cooking dinner
First car:
1975 Datsun (Nissan) 1400 which I wrote off in a car accident
but the first car I ever bought (with the money paid out to me following this accident) was a 1978 Toyota Corolla … it was this terrible beige/brown color!

First accident/traffic violation:
I was ‘rear-ended’ by someone on the high way (on the way to church). The guy clipped me on my right hand back corner (we drive on the left hand side of the road in South Africa), flipped me and we rolled about 3 times. We landed back on the wheels but the car was a wreck. My brother and I could get out but my brother-in-law was stuck and had to be cut out of the car. He also banged the back of his head on the tarmac every time we rolled so he needed some staples to close that up. My brother who was sitting between the two of us had a tiny scratch on his forehead.  I hurt my back. Since that model didn’t have any seatbelts I guess we were very lucky to get off so lightly.

First thing you wanted to be when you grew up:
A teacher …. for years this is all I wanted to be. Since I have several family members who are I’m so glad that I never did.

First choice beverage:
Coke light, coffee, rooibos tea, Strongbow cider à it depends
First choice breakfast:
Pancakes with turkey bacon (if I don’t have to make it) but most mornings I have a croissant and coffee (at work).

First song that comes to mind:
Jingle Bells …. listening to it at the moment

First major purchase:
My car, with some of the money I got following my accident.  I also bought a fridge, a bed and a dinning room table/chairs at the same time.  I don’t have any of it since we sold everything the first time we moved to Belgium. But my cousin still has the bed frame.

First job: [aside from babysitting]
I worked as an au pair in Germany for six months … it was a bit of a disaster. The baby girl started calling me mama while the little boy didn’t like me at all! So after six months I decided to go back home.

First time you flew on a plane:
1997, when I flew to Germany.  I didn’t know if I could get up and go to the toilet and since I was stuck between these two large German ladies I didn’t move for the entire flight.

Email ThisBlogThis!Share to TwitterShare to FacebookShare to Pinterest
Labels: firsts

My heart is broken for all the families touched by this terrible incident. As well as for all families having to deal with sadness and loss at this time of the year.

This is such a stark reminder of how imperfect this world is.

What a stupid! pointless! massacre!

I’m absolutely horrified by what happened in Newtown on Friday.  In fact I can’t even read the news articles without feeling sick to my stomach.  Those poor families. Not only do they have to face Christmas, but also a life without their kids.  All their dreams destroyed.

What a stupid! pointless! massacre!
Posted by Jo at 6:13 AM 3 comments:

Email ThisBlogThis!Share to TwitterShare to FacebookShare to Pinterest
Labels: sad

Just to let you know that I have not stopped blogging or fallen off the face of the earth. I'm just super busy!

Between, work, after work work functions, the kids and the house (my cleaning lady is on leave) time for blogging is hard to find.

So I'll try and pop in and read your blogs when I can ....
Hope you are getting into the holiday spirit!

Email ThisBlogThis!Share to TwitterShare to FacebookShare to Pinterest
Labels: crazy

I think the kids started asking me when my works annual Saint Nicholas party was going to be in November already. Then on Sunday morning I’m down in the kitchen and I can hear them fighting. Great start to the morning. So I go upstairs and tell them, I don’t care what this fight is about but if you two don’t make up and become friends again we are going to give the party a skip.

I mean, how could it not work, it’s all they’ve been talking about since November.

Fine, they both say to me, then we just will not go. And off they storm in different directions.

Oops, that didn’t work out quite how I expected it to.

And for some reason me getting into trouble did the trick.

I think the party was even bigger this year. The great thing about the kids being bigger now is that we don’t have to traipse after them anymore, we can just sit at the table and chat (or try to, over the noise) while they are off bouncing on the bouncy castles and getting their faces painted etc.

After 2 hours we had had enough of the noise and convinced the kids that it was time to go home.

I also had a dinner date with some girl friends, so after making sure that Himself and the kids and the dogs were all sorted for dinner I left.  Got back home at 2 this morning and all we did was sit around the dinner table chatting. 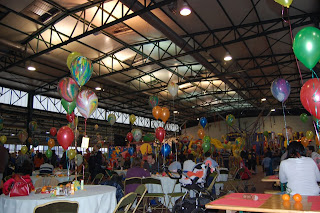 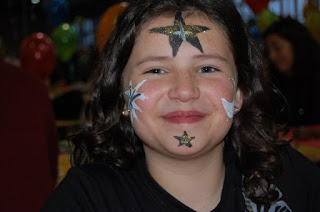 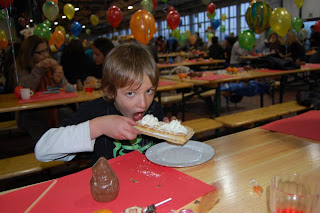 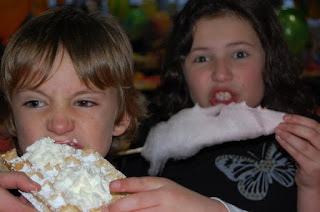 What they found in their shoes

In case you are wondering what the kids found in their shoes this morning I can tell you that they were very happy to find gifts rather than coal.

I can also say that I have one firm believer.

In October Tiger got a PSP3 for his birthday. Unfortunately, Gus (one of the dogs) managed to pull one of the controls out of the basket where they are kept on the shelf and chewed it to bits.

Tiger was realy worried about what his dads reaction would be if he found out  so he just told me.  What he didn't know is that I told Himself about it.

Cat on the other hand still wants to believe but is not so sure since all her friends have told her that it’s her parents.

I say: 'it’s true as long as you believe it’s true'

Email ThisBlogThis!Share to TwitterShare to FacebookShare to Pinterest
Labels: what Saint Nicholas brought

Shoes by the fire place

Tonight in homes across Belgium (Holland, Luxembourg and parts of France. Maybe even in Austria, Poland and Romania but I’m not 100% sure about these countries) kids will be leaving their shoes by the fireplace with some carrots, sugar cubes and cookies.

Right, I know it’s not Christmas eve so why are they doing it? Well it’s because tonight we are expecting Saint Nicholas or Sinterklaas, as he is called in Dutch.

So who exactly is Saint Nicholas? Well, the story goes something like this:

During the fourth century ‘Saint’ Nicholas was a bishop who lived in Myra (Turkey). He was a very kind man known feed starving children and saving maidens and in later years sailors would pray to him for safe keeping.

It is understood that Spanish sailors first introduced Saint Nicholas to the Dutch people during the 16th century, when Spain ruled Holland. In keeping with this tradition Saint Nicholas arrives by boat from Spain around the 17th of November every year. He then travels around with this trusty steed and one or more helper(s), Swarte Piet (Black Pete). There are many stories explaining why Pete is black … some say it is because he used to work down in the coal mines and is black because of the dust, others say it’s because the original Saint Nicholas had a dark skinned (Moor) helper.

But whatever the reason may be, St. Nicholas, Swarte Piet and the horse travel around the country writing down the names of all the good kids in a big book. Then on the night of the 5th they will bring presents to those children whose names can be found in the book. If you haven’t been a good boy/girl you might just find some coal or salt in your shoe, in stead of a present.

Then on December the 6th after all the presents have been delivered they travel back to Spain.

He doesn’t really have anything to do with Christmas so it’s just pure coincidence that he comes just 20 days before Santa.

Tonight Cat and Tiger will be leaving their shoes by the fireplace hoping to find something other than a piece of coal in it tomorrow morning. 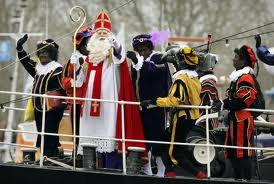 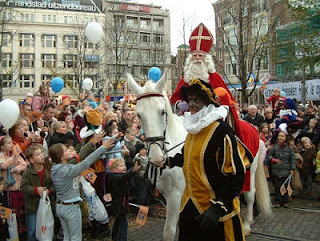 What I'm reading on the train